The End(game) of Avatar’s 10 Year Run 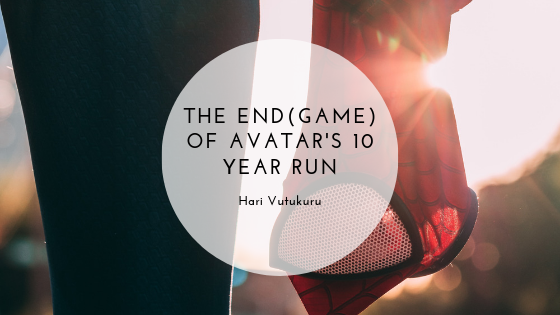 As of July 21, 2019, James Cameron’s 2009 film Avatar has ended its decade-long run as the highest grossing movie of all time, at $2.776 billion in earnings. The incredible graphics and unique storyline of Avatar held its reign in box offices for close to a decade, with only a handful of other films coming close competing – until April of this year. The 22-movie build up to Avengers: Endgame proved to successfully build anticipation among Marvel fans everywhere and the film broke records opening weekend alone. Now that Endgame has taken the box office throne, how long will this last?

After only 13 weeks in theaters, it became evident that Avengers: Endgame had what it takes to surpass Disney’s – previously 20th Century Fox – masterpiece. Since 2008, Marvel Studios had been gunning for this lead, consistently seeing box office success with its previous Avenger spin offs, following the adventures of heroes like Iron Man, Captain America, Black Widow, Black Panther, Antman, the Hulk, Spiderman, Thor, and more. In its domestic opening weekend alone, Endgame earned an astounding $357 million, and even more impressively $866 million overseas.

Avengers: Endgame isn’t finished yet either. Most marvel movies run in theaters for close to 25 weeks, meaning that Endgame could continue to surpass Avatar’s box office gross by millions. It is already over $2 million ahead since taking the throne last week. In fact, about a month ago, the film was re-released and added over 1,000 new theaters to its showcase. Avatar had an impressive run of 34 weeks, which bodes well for Endgame in that Marvel was able to beat their record with a much shorter run time.

Another attribute that Marvel can thank for its recent victory is the endurance that Endgame carries overseas, specifically in China. The movie is still seeing about $500,000 weekly in foreign earnings, with its predecessor Infinity War only gaining about $120,000 by this time in its run last year. Experts estimate that with the declining rate of earnings over the next few weeks in box offices, Endgame could stand to make a total of about $15-18 million more than Avatar when all is said and done.

Now the question remains, how long until another film comes after Marvel’s new title? It has been announced that Avatar will be releasing a sequel to it’s fiction film in December of 2021. Following suit with other popular film sequels of the past, many are wondering if this will come with a re-release of James Cameron’s original look into the planet of Pandora. An anticipated re-release right before a sequel will not only promote the new 2021 film, but could give the 2009 original another shot at taking back their title. Only time will tell.