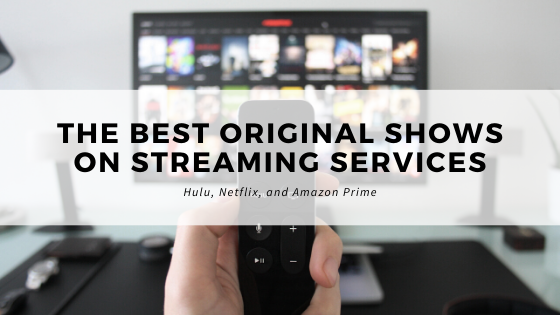 Streaming platforms have taken dominance over cable in recent years, providing viewers with more control over the shows that they want to watch. Moreover, these platforms allow consumers to stream their shows on a number of devices from smart TVs to mobile phones and tablets. The accessibility and variety of shows are just a few of the major factors that help streaming services reign supreme over cable television.

With this uptick in popularity and subscription numbers, and to avoid paying ridiculous fees for streaming rights to shows, most services have turned to their internal teams to produce their own original series. Most of these original series have gained a large following and many are the sole reason that a user pays for their monthly subscription to the platform. Below are some of the more popular shows streaming now on Netflix, Hulu, and Amazon Prime.

Stranger Things – Set in the 1980s, Stranger Things follows the adventures of a group of young boys who battle strange demonic-like creatures from a parallel world called “The Upside Down.”

Peaky Blinders – With only 30 episodes spread across 5 seasons, Peaky Blinders is a short but intense UK series centered around British gangsters, prohibition, and bootlegging.

The Crown -The Crown provides viewers with an intimate and dramatic portrayal of Queen Elizabeth II as she comes into power of the British Monarchy post-WWII.

The Witcher – Based on the series and video games, The Witcher follows Geralt’s journey throughout a medieval fantasy world as he battles magical creatures along the way.

The Handmaid’s Tale – The Handmaid’s Tale is a dark but powerful series based on a made-up future where middle and lower-class women are stripped of their rights and upper-class families use them for their fertility and little else.

Castle Rock – Castle Rock is a Stephen King adaptation that is equally as terrifying as it is entertaining. It follows the story of a death row attorney in the town of Castle Rock, along with the strange events that follow him around.

The Marvelous Mrs. Maisel – A dramedy set in the late 1950s, a Jewish American housewife is left by her husband and falls into stand up comedy as a response, all while dealing with her truth and living with her parents and two children.

The Man in the High Castle – This alternate-history show portrays how the world would look if the Axis powers had won WWII – A world run by Nazi Germany and the Japanese empire. The show takes a turn when the main characters find video footage showing the real results of WWII – the history that we know to be true.