An Overview of the Presidential Election Process 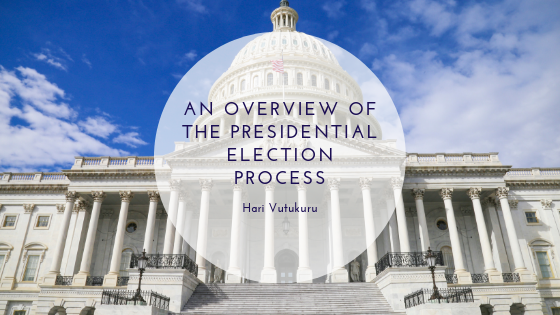 With the 2020 forthcoming presidential election only 17 months away, candidates from all over the country are announcing their political reformation plans in hopes to be chosen as the next leader of the United States of America. Political affiliations aside, it is important to understand the broad timeline of events that are going to take place in the next months in preparation for the general presidential election next November, as told by the United States Government.

Before a presidential and vice presidential candidate can take office, they must first make it past the multitudinous other pairs who believe that they are more adept to sit in the Oval Office. Step 1 to becoming president is to first win over a majority of delegates at the primary elections or caucuses held by party members in each state. In a Caucus, a discussion between party members will lead to a vote for the best fit. In a primary election, each party member will vote with a confidential ballot for their preferred candidate, much like in a general election.

After successfully making it past step 1, step 2 is being chosen by your political party delegates in the national convention. This is where the already slimmed-down list of potential representatives for both parties is solidified into 1 presidential candidate each, typically whoever won the majority of delegates from the primaries and caucuses. It is also here that the chosen presidential candidate elected for each part will announce their vice president.

After each party finalizes their one presidential candidate and their respective vice president, the campaigning starts. The candidates will then take the next several months to travel to each state, holding rallies and participating in debates with the other candidate. This, combined with exorbitant marketing and commercial platforms, is all in an effort to win the vote of the potential voters in November.

Finally, on the first Tuesday after the first Monday of the month of November, all eligible registered voters can vote for their preferred president of the United States. In casting a ballot for a presidential and vice presidential candidate, citizens are actually voting for a specific elector to cast a final vote on their state’s behalf. Each state has a group of electors equivalent to the size of the representation that the state has on Congress, in the House of Representatives and the Senate. The winner of the election is the candidate who receives the majority of electoral votes, which is 270 in total. There is a final Electoral College vote in December, however, the electoral votes will most often mirror the results of the general election as each member of the electoral college would likely vote for their affiliated party candidate. The president of the United States is then inaugurated, or sometimes re-inaugurated, in January.

In U.S. politics, specifically in the presidential election, there are many factors and forces that determine the representation of the citizens of the United States. It is important to remain informed in the process, as well as the candidate’s policies and views, to make a knowledgeable decision when exercising your 5th amendment right.