8 Must See Movies Coming to Theaters this Summer 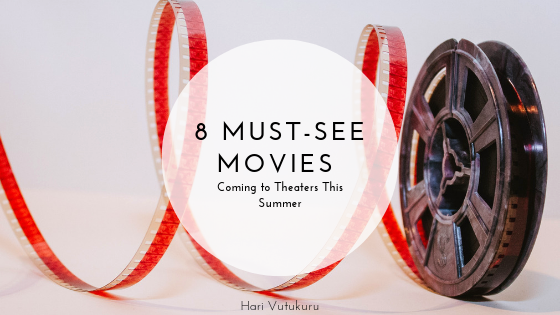 As we approach longer days and warmer weather, box offices everywhere are preparing for the surplus of cinematic gold that is set to release this summer.  Here are just a few of the ‘must see’ movies coming to theaters this season, in no particular order.

Aladdin: Disney takes a live-action spin on the refurbishment of this 1990’s cartoon classic. Along with a cast of newer faces of Hollywood, Will Smith portrays Genie and is tasked to fill the large shoes left behind by the late Robin Williams, who voiced the character in the original.

Rocketman: This biopic follows the early life of Reginald Kenneth Dwight, who later on would famously be known as Elton John. Bright colors and flashing landscapes take a back seat to the musical talent of star Taron Egerton, who showcases his own voice while portraying Elton John.

Dark Phoenix: With the buzz from Avengers: End Game finally settling down, Marvel is wasting no time releasing its next film in their expansive superhero series. A spin-off from the original X-Men movies, this Marvel movie follows Sophie Turner as Jean Grey as she evolves into the Dark Phoenix.

Spiderman: Far from home: Marvel Entertainment is wasting no time moving on with their heroes. Spiderman: Far from Home follows British rising star Tom Holland as Peter Parker who is trying to navigate the world after the events of Avengers: End Game. With returning characters like Nick Fury played by Samuel L. Jackson playing alongside some new-to-Marvel actors Zendaya and Jake Gyllenhaal, this film has become one of the most highly anticipated of the summer.

Once Upon a time in Hollywood: With an all-star cast including Brad Pitt, Leonardo DiCaprio, Margot Robbie and more, Quentin Tarantino’s newest film takes viewers back in time to Hollywood circa 1969. The movie follows a fame-hungry actor (DiCaprio) and his stunt double (Pitt) trying to make the most of Hollywood’s golden years. The film pays homage to early Hollywood’s nostalgia.

The Lion King: Disney’s continuation of reviving their early 90’s cartoon classics brings us the newest Lion King. Following the same storyline as the original, this revamp is done in a very realistic animation style. The remake features some big names in Hollywood like Beyoncé Knowles, Donald Glover, Seth Rogan, and James Earl Jones returning as Mufasa.

Booksmart: Actress Olivia Wilde steps to the other side of the camera in her directing debut. This coming-of-age story follows 2 teenagers determined to make their last night in high school memorable.  The storyline focuses on friendship with a twist of comedy.

The Last Black Man in San Francisco: A Sundance Film Festival masterpiece, this film narrates the tale of a man, played by Jimmie Fails, who dreams of acquiring the Victorian mansion that his grandfather built. Joined by his best friend, the main character seeks battles a feeling of misplacement in the neighborhood that once was home, where he grew up. It is a tale of gentrification and perseverance that critics are raving about.