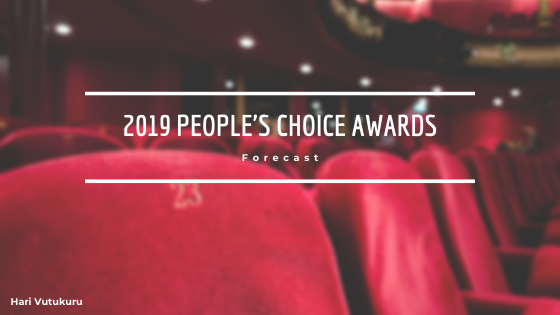 It may seem like autumn flies by far too fast but for some pop culture fanatics, the end of the year brings with it the best season – awards season. The harsh winter months will soon be here, riddled with red carpets and gold statuettes. For those of us eager to see the cast of our favorite movies reunited, or even those just in it for the pre-dinner fashion show, the awards can’t start soon enough.

Luckily, a few events are in the offing so we don’t have to wait until January to satisfy our pop culture cravings. On November 10, the 2019 E! People’s Choice Awards will be broadcasted, recognizing and awarding cinematic accolades. Here is a small sample of the movies and shows that are in the running for E!’s newly redesigned golden trophy.

Perhaps the most anticipated category of the entire show, 8 contenders are going up for the coveted title of the Movie of 2019. Avengers: Endgame recently surpassed Avatar as the highest-grossing movie of all time. Fans are eager to see if it will hold up against the live-action remake of the Lion King, or the continuation of the adventures of Woody and Buzz in Toy Story 4. Joining the running on the Marvel side are Captain Marvel and Spiderman: Far from Home. Feel-good movies and superheroes aside, action-adventure makes an appearance with the latest installments of Fast & Furious: Hobbs & Shaw and the third chapter of John Wick. Finally, Us represents the only horror movie nominated.

For the seven movies that do not bring home Movie of the Year, most are nominated within subcategories based on genre. Various actors and actresses have also been nominated specifically for their talents throughout these popular films, like Robert Downey Jr. (Avengers: End Game) and Lupita Nyong’o (Us) to name just a few. Joining in are several actors and actresses made famous from their role on TV, like Kit Harrington (Game of Thrones) and Reese Witherspoon (Big Little Lies).

Netflix’s Stranger Things is, to no one’s surprise, in the running for TV Show of 2019. HBO’s Game of Thrones has seen countless success from other award shows in this category and may continue their streak with E!. While those two seem favored, shows like The Walking Dead, The Big Bang Theory, and Grey’s Anatomy have been around long enough to earn their nominations. This is Us and Riverdale are in the running, too, alongside WWE Raw.

The award show will also pay tribute to the music industry with the nominations of several of the world’s most popular male and female singer/songwriters. Not only do fans get to vote for their favorite songs and albums of the year, but they had the opportunity to support their favorite singers, tours, and music videos. Finally, the show will bestow awards to pop culture’s leading influencers in fashion, sports, beauty, and more.

For those fans who keep up with their favorite socialites on all platforms of media, this is a show you will not want to miss.